ssh is one of those things that’s useful for way more than meets the eye. Here’s a handy feature to add to your bag of tricks — you can tunnel traffic from your machine to a remote machine through another server running an ssh server.

Where this is often useful is in setups where you want to access a system on a private LAN, but it’s behind a firewall or bastion host (running ssh). You could connect if you were on the LAN on the other side, but you’re not. 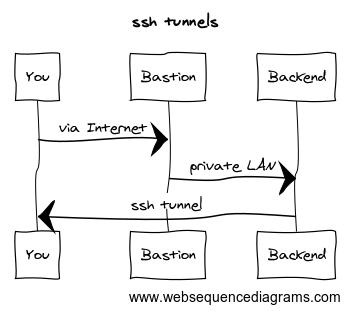 So, maybe you’re on your laptop at an airport hotspot, and 192.168.1.2 is the IP of a home system. You can map a port on it to your laptop by ssh’ing through your Linux box listening over ssh at home.

At a previous employer, I used this to manage our SAN via its (awful) web-based UI on our production network. The SAN was obviously not reachable over the Internet, but I could map its web UI to localhost:8080 on my desktop through a bastion host we had.

One thought on “ssh tunneling for fun and profit”